About Michael “The Bard” Mullin

Michael was born and reared on a 15 acre farm in Foremass Lower, Sixmilecross, Co. Tyrone. He was born 29th January 1886 and baptized on  the 9th February. He died in 31st January 1978 at the age of 92.  His mother was Margaret Conroy and his father was Terence Mullin who married into the place.  His grandfather was also Michael Mullin of Foremass and his granny was Anne McElduff from Carrickmore.

His mother’s father was Daniel Conroy of Foremass who married Mary Quinn from Drumfad.  She had a great influence on his life because she was the granny in the home until he was 17 years of age.  She was born in 1824 and died in 1903.  She had lived through the Famine and the abortive Fenian Rising and told him many things about these times.  She could remember seeing and smelling the blight on the potatoes.  When a family was emigrating it was the custom for friends and neighbours to leave them to Dungannon in the early morning to catch the coach or train to Belfast and the emigrant ship.  She could remember seeing the mist of the blight on the potatoes and the distinctive smell as she passed along the road and everyone knew that another farmer was doomed to disaster.

He lived through the turbulent times at the beginning of the twentieth century and in his early years he read and contributed to papers like The Nation, The Weekly Freeman, The Packet and other such magazines of a Nationalist and Republican point of view.  He also wrote for the Ulster Herald (first printed 1900-91) and there was a long running poetic debate in the Herald about whether young ladies should wear cloaks or shawls.  It was at this time (1905/06) he was first called ‘The Bard of Foremass’ by a fellow poet and cousin, Michael Conroy (or Corey as it was pronounced) from Barnesone who at the time penned his poems under the name  Ellen Mc Cann.

Later his poems were published in The Weekly Independent, The Cork Examiner, The Holly Bough, The Irish Weekly and some religious magazines, The African Missionary and The Far East.

His poems reflect his appreciation of nature and farming and all it entailed, (ploughing, harvesting, bog time) also his love for his native Foremass. His deep love of family and friends are also reflected in his poems and you will see that events like death and emigration (both his brothers emigrated) had a huge affect on him. His deep faith is reflected throughout all his poetic work and was so important to him throughout the 92 years of his life.

The family have quite a collection of newspaper cuttings and hand written poems some in book form and many written on the back of envelopes or any pieces of paper available to him. (There were no A4 file pads back at the beginning of the 1900’s and everyone recycled long before the phrase recycling was ever invented). Many of his hand written books had gone missing – perhaps he gave them to someone to read – we treasure the poetic work we have.

His wife Mary predeceased him and his sons Michael, Terence and daughter Margaret Keenan have also died. He is survived by his daughter Joan and son Patrick Dan (who provided most of the facts here and also footnotes on some poems). In our gallery page you will find some video recordings of Patrick Dan reciting some of his father’s poems.

Many family members are known to have penned some verses but his grandson Joe Duggan (Joan’s son) is a teacher and professional poet. He lives in London and has published his first book of poems ‘Fizzbombs’. He performs widely in London poetic circle https://joedugganwrites.com.

When I think how little men regard
The labours of one rustic bard,
Who sings to lighten the heavy load,
Who sings to brighten the dreary road,
Who sings to frighten the clouds of care,
And gladden the sorrowful everywhere;
Who sings of the beauties God bestowed
On each Foremass river, field, and road –
When thus I think I feel so sore,
I grow resolved to sing no more.

But soon as I wander forth again,
Down by the river, or up the lane –
Soon as I gaze on the fields I love,
On the hills around, or sky above,
On a nice wee flow’r, or sweet wee bird –
Just then my spirit is softly stirred:
And somehow, before I know what’s wrong,
I’m back again in the land of song:
And as the lines surge through my brain –
I’m out with my pencil and at it again. 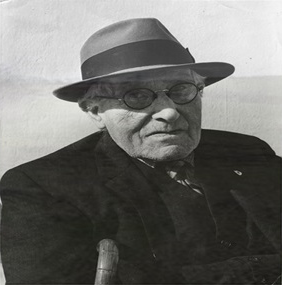 Poem of the Month:
Memories of May

When May assembles butterflies and bees
Round April-ornamented apple trees,
And when I gaze on orchards blossom-decked,
I pause in my lone wand’rings to reflect
On one old orchard.  To another spring
Back in the past my truant thoughts take wing;
And side by side with trusty friends I stray
Through an old garden-orchard for away.

The road of life has many ups and downs;
And Fortune for us all has smiles and frowns;
Upon Life’s road we meet many a friend,
And part with many.  What is round the bend,
Ahead of us, we neither see nor know,
No wonder that our thoughts incline to go
Oftener backwards as we further stray
From childhood’s garden-orchard far away.