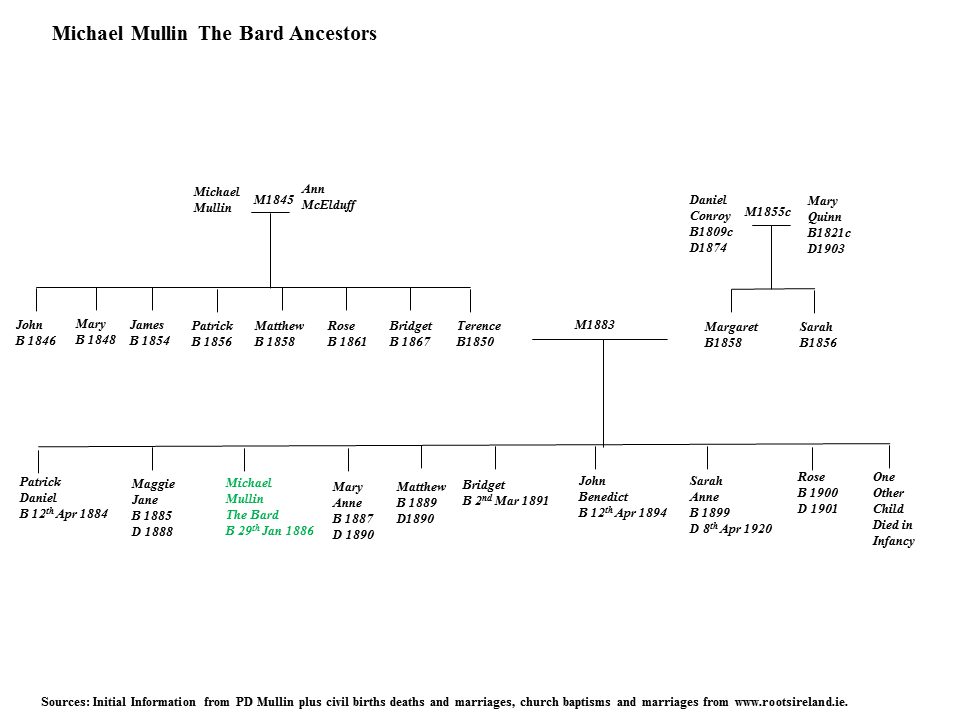 Michael Mullin was born on the 29th of January 1886, to Terence Mullin and Margaret Mullin (née Conroy) of Foremass Lower, Sixmilecross, County Tyrone. Michael was one of ten children. Sadly, only five survived to adulthood.

Patrick Daniel Mullin, born on the 12th of April 1884, was the eldest of Terence and Margaret’s children. He went to school in Cloughfin with Master Henderson, who prepared Patrick for the civil service exam and helped him secure a job in London County Council. Patrick Daniel married Ann from Cork and had one daughter Sheila, who became an actress. Sheila married Renato Cardano and went to live in Italy. Her parents followed her over to Italy and Patrick Daniel died there in 19XX. Sheila had one son and two daughters; Patrick, Clelia and Luisa. Tragically, Patrick died as a young man in a car accident; he was a doctor and married with one baby daughter. Clelia and Luisa married and moved to the U.S. where they live with their families on Chesapeake Bay.

John Benedict went to school and followed Patrick Daniel to London, into a job working with London County Council. He married Edith and they had two children together, Kevin and Moira. Moira moved to Canada and her family still live there.

Sarah Anne was born in 1899 and died with appendicitis in the Mater hospital Belfast on the 8th of April 1920. She was a dressmaker and was renowned for her beauty. She was only 20 years old.

There was another baby born to Terence and Margaret Mullin that had already died by 1911. However, no baptismal cert, birth cert of death record has been found to confirm this baby’s name thus far. 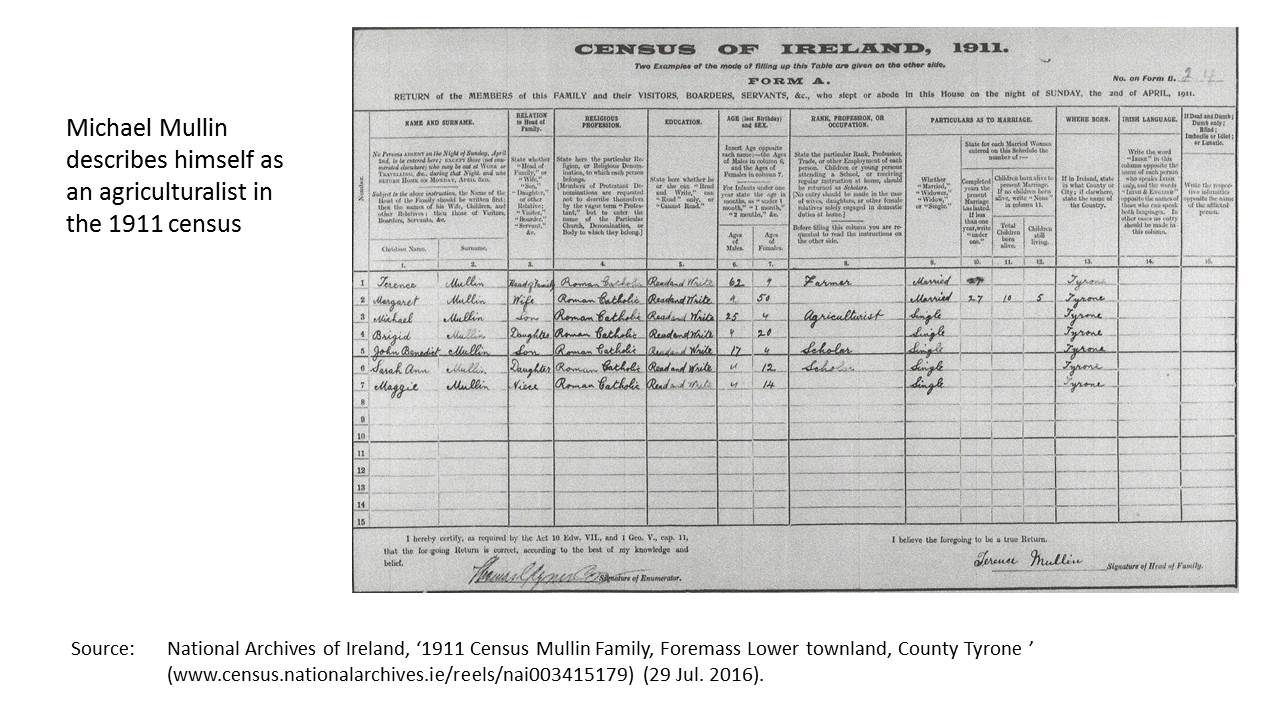 Michael’s father, Terence Mullin, was baptised of the 3rd of February 1850 and his parents were Michael Mullin, Foremass and Anne McElduff from Creggandevesky.

Michael and Anne’s eldest child was their son John, who was baptised on the 15th of November 1846. He never married.

Mary Mullin was baptized on the 8th of August 1848. She married Mr. Lenny from Golan and her family includes Bishop Lenny and the Lenny family, the Gormleys of Balleygawley and the Earleys of Aughnacloy.

James Mullin was baptised on the 27th of December 1854.

Patrick Mullin was baptised on the 16th of March 1856.

Matthew Mullin was baptized on the 3rd of March 1858. He married Maggie Devine and they had five children together; Micky, Johnny, Annie, Margaret and Bridget E. Annie married Joe McCann. After Annie’s death, Joe married her first cousin, Rosaleen McKenna of Tulnafoil.

Margaret Mullin died in a car accident in London.

Bridget was born on the 21st of January 1867 and was baptised on the 9th of February. She married a McKenna from Tulnafoil and they had two daughters, Mary Ann and Rosaleen. Rosaleen married Joe McCann.

Margaret, the daughter of Daniel Conroy (Corey/Cory) and Mary Quin (Quinn), was baptised on the 11th of July 1858.

Margaret had one older sister, Sarah, who was baptised on the 14th of  September 1856. Sarah married John Mullin on the 3rd of April 1877 and they lived in Crocknagulpa. Both John and Sarah died young and their youngest daughter Maggie was reared in Foremass with her granny, aunt and uncle. 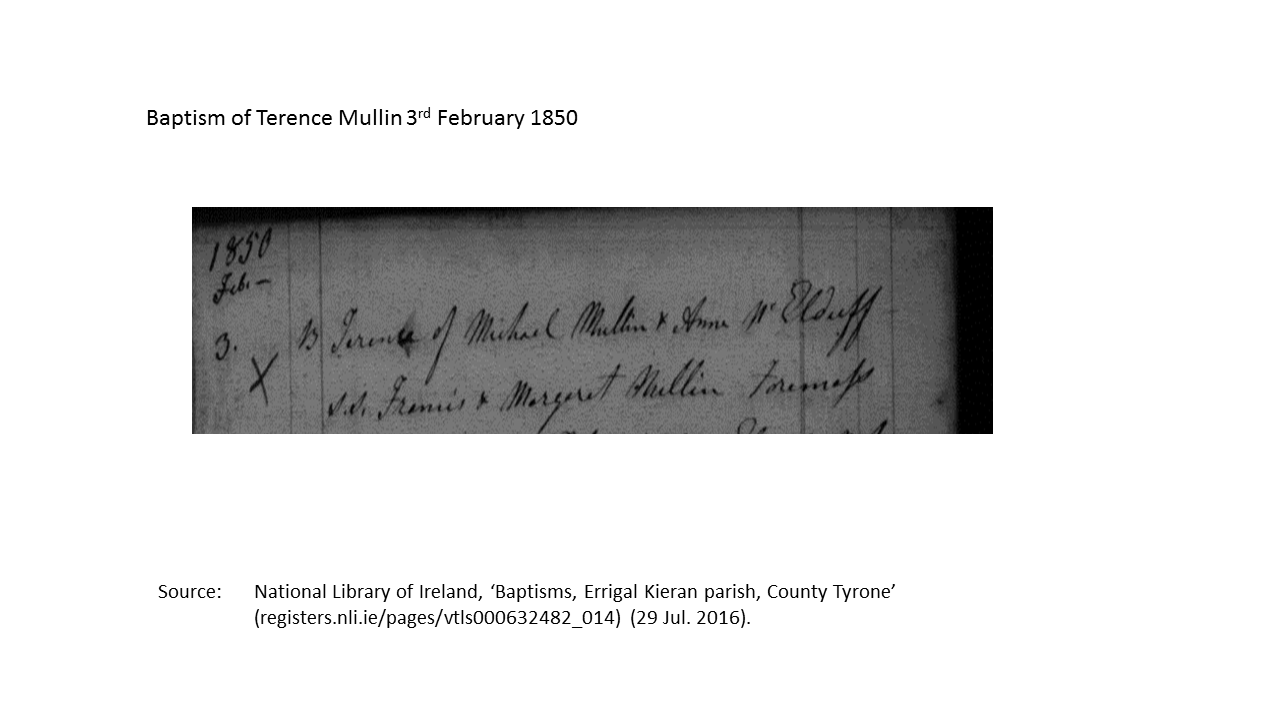 Michael’s grand-daughter, Maeve Mullin, is an established genealogist in Dublin.