This website has been developed to celebrate the memory and to share a collection of the poetic verses of the Tyrone  poet Michael Mullin, also known as Michael “The Bard” Mullin. He was known locally as ‘The Bard of Foremass’. Born and raised in the townland of Foremass Lower, Sixmilecross, County Tyrone, Michael’s love of  nature, the land and its people and his deep faith  is reflected in all his poetry. 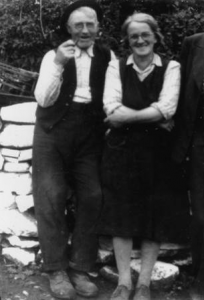 When his grandson Patrick Mullin died and being of a computerised mind he bequeathed that this website be set up to publish his grandfather’s poems. It has taken some time and many false starts but we the family have now organised a small amount of his poems here.

We hope you get the same enjoyment from his poetic verses as we do.

Michael Mullin was born on the 29th of January 1886 to parents Terence and Margaret Mullin née Conroy. He was reared on their small farm in the townland of Foremass Lower. As he grew up and lived in his beloved Foremass he always saw God’s handiwork in the natural beauty of the countryside and from this he drew inspiration for a lot of his writing.

He lived through turbulent times at the beginning of the twentieth century and in his early years he read and contributed to papers including The Nation, The Weekly Freeman, The Packet and other magazines of a nationalist and republican point of view. He also wrote for the Ulster Herald and there was a long running poetic debate in the Poets Corner in the Herald about whether young ladies should wear cloaks or shawls and it was at this time that he was first called The Bard of Foremass by fellow poet Michael Conroy from Barnesone. He contributed to the Ulster Herald from his late teens to well into his old age.

His poems were also published in The Cork Examiner, The Independent and religious magazines, The Far East and African Missions

He married Mary Jane Mullin of nearby Foremass Upper townland in 1919 and reared their family in Foremass. His poetry generated much needed supplemental income for his young family. As a prolific poet Michael Mullin wrote on a wide range of subjects but his favourite themes were Nature, God, Love, Family and Farming. His catalogue of poetry stretches to hundreds of published poems with further work that remains unpublished.

Poem of the Month:
Memories of May

When May assembles butterflies and bees
Round April-ornamented apple trees,
And when I gaze on orchards blossom-decked,
I pause in my lone wand’rings to reflect
On one old orchard.  To another spring
Back in the past my truant thoughts take wing;
And side by side with trusty friends I stray
Through an old garden-orchard for away.

The road of life has many ups and downs;
And Fortune for us all has smiles and frowns;
Upon Life’s road we meet many a friend,
And part with many.  What is round the bend,
Ahead of us, we neither see nor know,
No wonder that our thoughts incline to go
Oftener backwards as we further stray
From childhood’s garden-orchard far away.